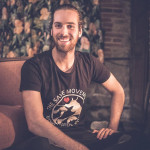 François Carreau is a 27 years old animal rights activist, who specialises in gathering undercover footage from factory farms and slaughterhouses around Europe. He's developed these particular set of skills by setting up DxE France and working for L214 (France's biggest animal rights organisation) as an investigator, charged of filming and gathering undercover footage. He now is in the process of polishing and introducing a new organisation aimed at exposing animal agriculture in Europe. More will be revealed in the future.